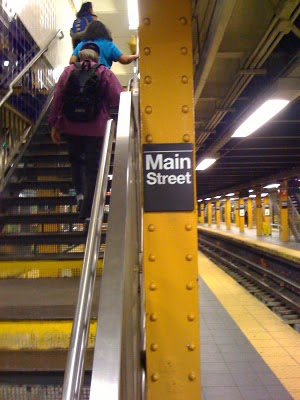 My Beloved and I were either mad dogs or Englishmen in a previous life, because we never do anything except in a blazing midday sun. A hike in the California desert? A tourist trek across Cochin, India? Hang on, we have to wait till the clock strikes twelve and the temperature goes into triple digits.

And so our debut End-of-the-Line trip (the first of our excursions to the farthest reaches of the New York subway system) took place on the hottest day of the year so far. Admittedly not 100 degrees—but 86 and the first humid day of the season. That immediately put us in a good mood.

Our mission: to ride to the end of the #7 train, said to be one of New York's busiest lines and one of the most ethnically diverse subway lines anywhere. The 7 originates at Times Square in Manhattan and ends at Main Street and Roosevelt Boulevard in Queens—smack in the middle of Flushing's Chinatown.

But the fun of the ride started earlier, as soon as the train emerged from under the East River and came up above ground in Queens. I love riding elevated trains, getting the roof-top view of the surrounding city and the occasional glimpse into people's windows. Three of the stations in Queens, including 46th Street, take advantage of the outdoor light on the elevated platforms with beautifully imaginative stained-glass windows. We came out of the subway at Flushing-Main Street and into a crush of people on the sidewalks, shops selling discounted Chinese music CDs, and a profusion of Chinese bakeries and noodle shops. As usual when we go anywhere, I had specific foodstuffs on my mind, and if it's Chinatown this must be bao—specifically cha siu bao, roast-pork buns.

After a meander through the indoor Flushing Mall (where the massive True Love Wedding Shop made us happy we'd eloped), we came back out to Main Street and spotted the Taipan Bakery. Although I prefer steamed bao (white and doughy on the outside, sweet barbecued pork on the inside), when you're starved and you're staring at a bakery case exploding with gorgeous sugary products, you don't stand on principle if only a golden-brown baked bao is available. I heroically resisted the cakes and custard buns, picked out my bao, and Stan went for a red bean-paste bun. Then we chewed and sweated our way south through the crowds on Main Street to the Chung Fat Supermarket.

Had we not been looking at a few more hours of touring in the hot sun, I might have been tempted by one of these grumpy fellows... 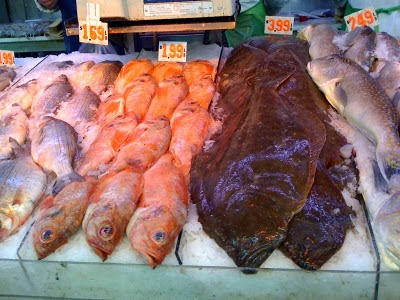 ...or by a bag of frozen dumplings, which filled two entire rows of freezer cases: 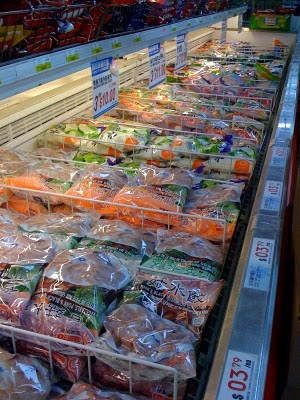 Instead we got a box of "Crisp Bits" banana chips and left the shopping mania behind. Another half mile down Main Street and we were in another world: the Queens Botanical Garden. One look at the ferns in the Woodland Garden and I instantly felt 20 degrees cooler. 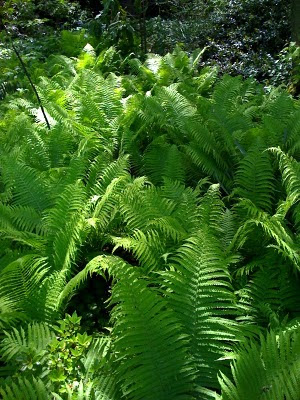 The Botanical Garden is part of a string of parks that flow through Flushing (sorry) like a gentle green river—while the Long Island Expressway, the Grand Central Parkway and the dreaded Van Wyck (which leads to JFK, as any Seinfeld fan can tell you) roar by on overpasses.

We walked across the street to Flushing Meadows-Corona Park, site of the 1964 World's Fair: 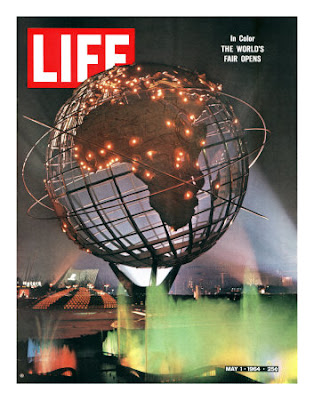 It's changed some since then: 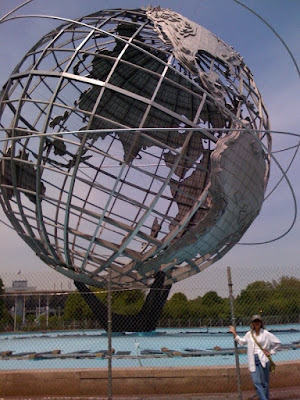 But my favorite thing was the description of the time capsule contents from 1964, which were buried alongside the capsule from 1938–39. 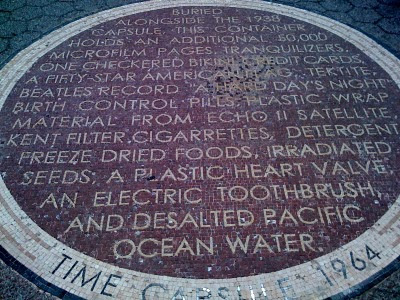 I especially love "one checkered bikini," "tranquilizers," and the misspelling of "cigarettes" for all eternity.

The busy Flushing Meadows-Corona Park is also the site of the U.S. Tennis Association's Billie Jean King National Tennis Center, to which I had to pay homage—though sadly, the players we spied through the chain link fence bore no resemblance to Roger Federer or Rafa Nadal. 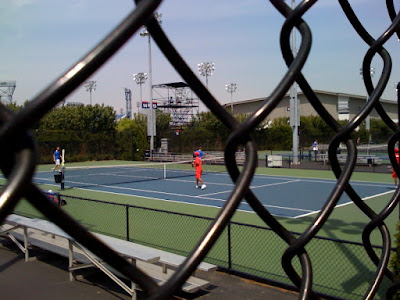 Having now achieved our end-of-the-line objective, it was time to head back the other direction. But first we had a few more stops to make.

While in theory it seems a romantic notion to blindly hop a train, go to the last stop, and see what you see, I knew that would likely to lead to some serious disgruntlement as we ended up hot and sweaty down a blind alley in an industrial no-man's-land. So we did some research before the trip, including consulting our friend Rick Meyerowitz, who's been to every corner of every borough and has eaten everything he found there. And lived to draw the tale. (If you didn't see it in The New Yorker, check out the astonishing culinary subway map Rick produced with his partner Maira Kalman, in which they reproduced the New York subway map and replaced every single station with place-appropriate funny food names. All aboard for Montezuma's Revenge!)

So with Rick's suggestions in mind, we walked up and over the walkway that bridges the park and the Stadium-that-should-be-Shea-but-is-now-Citi-Field, and caught the 7 going back toward Manhattan. We got off five stops later, at 82nd Street, and stepped into the life under the el—the way much of New York used to be, until they tore down the 6th Avenue El and the 3rd Avenue El, and the El that once ran right up our street in the Village. 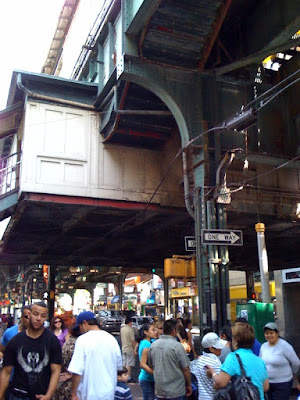 Having left Flushing's Chinatown behind, we were now surrounded by taquerias, clothing stores, divorce attorneys, bars, and music representing seemingly every country in Central and South America. I had visions of grabbing an empanada (an Argentinian bao?), but before we knew it, we'd arrived at 74th Street and the center of Jackson Heights.

Jackson Heights has been on my must-visit list almost as long as I've been coming to New York, and especially since our 2005 trip to India. It's the locus of Indian food and shopping, and I was ecstatic as we patrolled the aisles of Patel Brothers and Subzi Mandi, picking up:
* mustard seeds (99 cents!)
* heat-and-eat packages of palak paneer (spinach and Indian cheese) and navratan korma (vegetables, cheese and cashews in a creamy tomato sauce)
* a bag of "Kerala Mixture" snacks that looked like a packaged version of the bhel puri we saw being prepared on sidewalk stoves in Bombay;
* and a bag of "Mix Mukhwas," the ubiquitous after-dinner breath freshener snack (mostly fennel seeds) offered in bowls at the front of every restaurant we visited in India.

I lusted after a sparkly sari in a shop window: 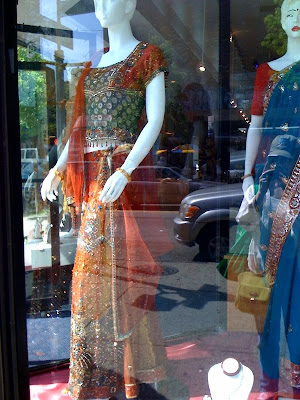 ...and we finished the afternoon with a late lunch at the touristic but excellent Jackson Diner (bhel puri and navratan korma, plus dal, cool yogurt-and-cucumber raita, warm and puffy naan bread) and two bottles of Kingfisher beer. It may be India's version of Budweiser, but it took us back to a rootop restaurant in Bombay on an impossibly humid and buggy evening, and how delicious a cool bottle of piss-water beer could taste.

Then, back up the stairs to the elevated train, an impromptu adios serenade by a full Mariachi band... 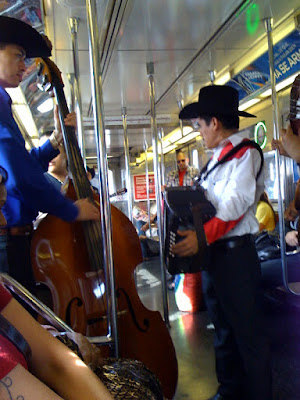 ...and we were on our way back home, back to the beginning of the line.
Posted by Susan Champlin at 10:49 PM

The #7 is my favorite line for all the reasons you describe so wonderfully. And I love the mariachis — they often ride and play on weekends, and they're the only band I enjoy on a subway.

Otherwise, I like to ride buses. You really see the city that way. I started doing it when I was a teenager. I had no air conditioner in my East Village railroad flat, so on hot summer days and nights my friends and I would ride air-conditioned buses everywhere and anywhere. I recommend it.

I'm now 1) thinking about riding trains 2) hungry 3) ready for a return trip to NYC. I love this delicious series and can't wait for your next ride.

How long does the actual subway ride take, non-stop, from where you got on, to where you finally disembarked?

So Lovely: I look forward to it—please come soon!

Michele: I agree about buses—the pleasure of seeing where you're going without the hassle of being the driver. Now I need a shower curtain of the NY bus system.

Marilyn: Thank you so much. And I'm looking forward to your return trip, too.

Gaylen: Good question, and I should have mentioned that. I'd say it was about half an hour from the beginning at Times Square to the end of the line. (By no means the longest subway line.)