[The third in an ongoing series of trips to the end of every one of New York's subway lines.] 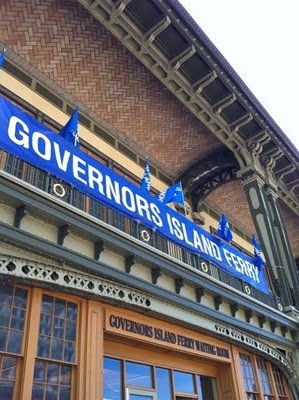 I love that Manhattan is an island. I love that if you walk anywhere long enough in any direction, you'll end up at water. I love that there are all kinds of methods for getting on and off the island—and that my favorite, ferries, can take you to other islands.

Yesterday was the 4th of July and it was 12,000 degrees in New York. (Today it's 12,001.) Naturally that meant one thing to My Beloved and me: We must spend it out of doors for hours on end, surrounded by scads of other people. Otherwise, what's the point?

So we took our neighborhood train, the sweet poky local 1 train, to the South Ferry station at the bottom of the island. There we'd catch the ferry to Governors Island for a free concert by Rosanne Cash, whose latest album, The List (inspired by the list of 100 essential country songs given to her by her father, Johnny Cash) has been in heavy rotation at our house.

We'd never been to Governors Island before, so the lure of the new was part of the attraction of the day. A military installation since the days of the British (when it was used for "the accommodation and benefit of His Majesty's Governors"), the island was closed as a military facility in the 90s, and is now being redeveloped by New York State and New York City. The southern end of the island will be reshaped as a Central Park-like space, with man-made hills and streams, the better for viewing the Statue of Liberty across the harbor. The public can visit the island on weekends via the free 800-yard ferry ride, and bring or rent bikes to ride around the island.

As the doors of the subway train opened at South Ferry, the riders poured out and up the stairs, dividing left and right depending on whether they were aimed at the Staten Island Ferry (right) or the Governors Island ferry (left). We shared our standing space at the front of the ferry with a group of 20something hipsters and a hyper-confident, blonde-ringleted five-year-old who muscled her way to the window to announce the goings-on.

"WE'RE LEAVING!" she bellowed as the ferry creaked away from the dock. "WE'RE MOVING! HEY, WE'RE GETTING THERE! WE'RE HERE!"

While we'd had visions of sitting in the blazing sun for hours, we were surprised to find the island shady and pastoral, with rows of grand old houses that are in the process of being reconceived as artists' galleries and local artisans' shops, among other things. On the 4th of July, it was an ideal place to loll about and picnic. 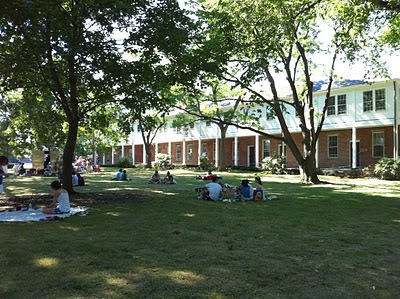 We planted ourselves in a prime spot near the stage almost two and a half hours before the concert, and spent the time people-watching, reading, eating grape tomatoes and chocolate-covered pretzels, and noticing that the signage managed to spell Cash's name wrong. (No "e" in Rosanne, guys.) The sound check gave us early birds a little bonus concert, as she and husband John Leventhal and the band tested out the blues classic "Motherless Children." 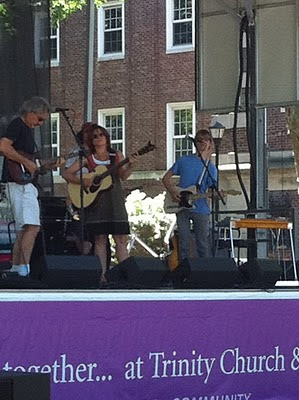 The concert itself included fantastic duets between Cash and Leventhal on "Sea of Heartbreak" (which she performs with Bruce Springsteen on the album) and "Bury Me Under the Weeping Willow"; a rocking version of "This Land Is Your Land"; and Cash's killer cover of Bobbie Gentry's "Ode to Billie Joe." 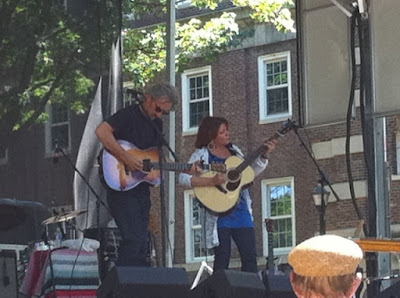 And the rousing encore of "Man Smart (Woman Smarter)" gave me the happy chance to trot out my lame white-girl dance. 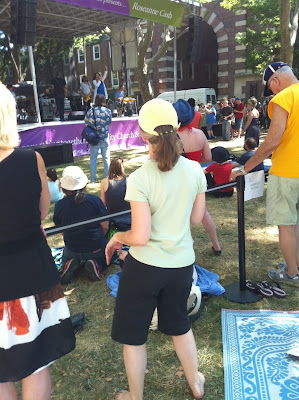 Then...back across the water to Manhattan... 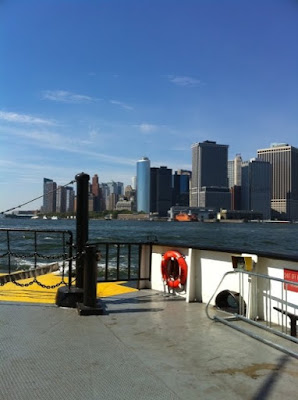 ...just in time for a wonderfully international 4th of July dinner with old and new friends from the U.S., the U.K., South Africa, Italy, India, and Canada. Plus a view straight down 23rd Street of the fireworks over the Hudson River.

I know it wasn't Thanksgiving, but I gave thanks, anyway—for independence, for great friendships and great music, and for a family and a city I love. 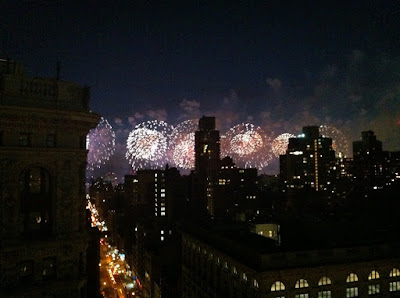 Posted by Susan Champlin at 9:40 PM

What a swell holiday (and a lovely sentiment). The fireworks photo is a real sparkler - love it.

It makes me happy how your relationship with the City, shy at first, has blossomed. This is beautiful - a perfect 4th, complete with a ferry ride with a hilarious 5 yr-old seemingly straight out of SNL.

Thank you so much, Marilyn, Wzzy and Miss Whistle, for your lovely comments—even though Blogger is currently refusing to display two of them, grrr!

I so love reading your blog! It is exceptional, really, and one of the only blogs I make time for. Your train excursions bring me right back to NY. The pictures - fantastic. Don't get discouraged (please). I want to advertise your blog, but must figure out a way to do it.
Thanks and keep writing.

Oh, you made me miss NYC so much! It's been too long since my last visit. Perhaps when we get properly settled in our new down-sized life in London, we can think about a trip over to the Big Apple again.