I'll admit right off the bat that this one is a bit of a cheat. Yes, we did arrive at the end of the line on the E train, but it was...an accident. It was part of a series of June travels—New York-L.A.-New York; New York-Virginia-New York; New York-Orlando-New York—that have only now ended and involved one unexpected ride on a shuttle bus in Jamaica, Queens when the subway was being serviced. And a careening, cheek-by-jowl journey it was, as squashed travelers and locals swayed and lurched through the lamplit neighborhoods, keeping up a loud patter the whole way—"This is riDICulous, yo"..."Where are we GOING?"..."Just take me to my crib, I'll DRIVE to Manhattan"—until we all tumbled off the bus together at Union Turnpike and poured down the stairs to the subway.

So, my apologies, both for this little ruse and for my long blog absence.

After spending so many months chronicling my impending life changes—a Child going to college, a cross-country move to New York—I discovered that once I actually landed, I got so swept up in just being here that I neglected to settle down and write about it.

And there was the little crisis of confidence, too; the feeling that I was blathering on narcissistically and who could possibly care? (I'm not fishing here, I swear.) But a few gentle nudges from friends made me realize that I was being a wuss, and a lazy one. If you're going to start a blog, then blog, you idiot.

Hence, blog. So where were we?

1. In which she dives into the deep end. Within a week of our official, no-turning-back move to New York, I had joined the Film Forum, the New-York Historical Society and BAM (the Brooklyn Academy of Music); donated money to Hudson River Park and WNYC (the local NPR station); attended three films, including one double feature (Red Dust with Clark Gable, Jean Harlow and Mary Astor, and Bombshell with Jean Harlow, Lee Tracy and Franchot Tone—bliss) and bought tickets for two lectures. Who knew that the multitudes were waiting breathlessly for a chat on "James Madison and the Constitution"? 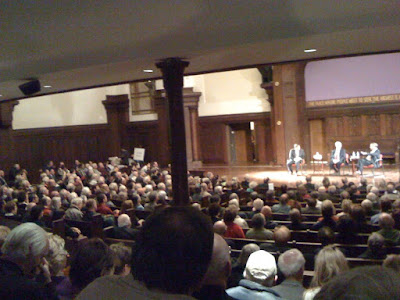 I felt like a pirate plunging both hands into a great pile of plundered loot: the riches! I wanted to do it all, every day.

2. In which she receives visitors. In the span of a month, we welcomed four of my five siblings, my sister-in-law, one brother-in-law, one niece and one nephew, many of whom gamely camped out with us in our wall-less one-room loft. Besides offering a warm blanket of family togetherness, these visits were a fantastic opportunity to be an annoying show-off. "That white building that looks like crumpled plastic? Oh that's Barry Diller's IAC headquarters, designed by Frank Gehry." "Here we are in Washington Square Park, where they once conducted public hangings and buried impoverished victims of the yellow fever epidemic." I adore being an annoying show-off. These visits also got us to parts of town we'd never been to before: the archives building where you can do genealogical research; the gorgeous new Brooklyn Bridge Park on the East River between the Brooklyn and Manhattan Bridges; the Museum of Arts and Design; Grimaldi's Pizzeria. You see things in a new way when you show your town to out-of-towners. 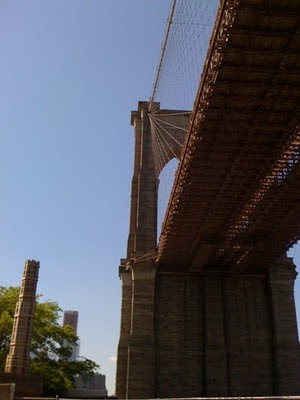 3. In which she goes..."home"? In early June, we flew to Los Angeles for 10 days, the first time we'd been back since the move. Having reserved the smallest rental car possible (the clerk tried to persuade us to upgrade to a compact), we ended up with the only car left on the lot: a monstrous white SUV. I mention this because the weirdness of lumbering around in a Sherman tank after 30 years of driving Hondas and Toyotas added to my initial sense of dislocation and discomfiture. I didn't belong here anymore. The next day we downgraded to a Hyundai and things began to feel more normal. We stayed with my parents, gathered with family, visited friends, soaked up the sight of blossoming jacaranda and bougainvillea... 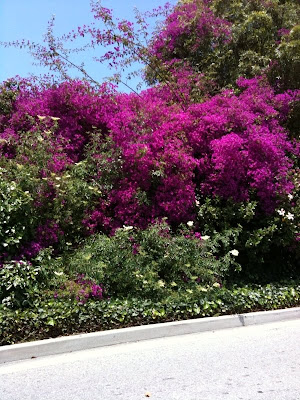 ...spoke to a classroom full of fifth-graders, tooled around town, and took a passing glance at our old condo building (pang). I visited with The Child, who is staying with her dad for the summer, and felt the familiar flutter of guilt over selling her childhood home. Then she and I made a red velvet cake for a family birthday party, and all was temporarily right with the world. 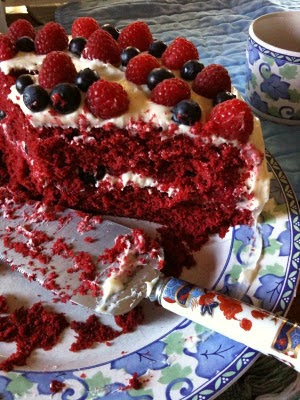 4. In which she goes there and back again. A late-night arrival at JFK, one whirl on a subway shuttle bus (see paragraph 1, subsection a), and a 5 a.m. wake-up call later, we took Amtrak down to Washington, D.C. for a research trip into Virginia. (The second in our series of graphic novels is set during the Civil War, and opens on a fictional plantation near Fredericksburg.) We stayed with my cousins, the youngest of whom led us on a walk in the lush woods near their home: 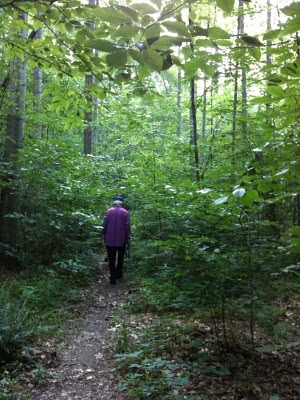 (That's my Beloved, though, not my seven-year-old cousin in the photo.) Civil War history being rather ever-present in Virginia—we were once crisply informed by a white-haired gentlelady in the Richmond Visitor's Bureau that "Theah's just one pawnt of view down heah, and it's the Confederate pawnt of view"—it wasn't difficult to find sites where we could witness 1860s farm life in action. Ask me anything about grain cradles, flails and threshing wheat! On our last day, we toured the Smithsonian's American History museum, where I pronounced Hillary's gown the best-looking of the First Ladies' inauguration dresses (yes, even more than Michelle's one-armed number), but Grace Coolidge's flapper style evening gown the most delightful of all. Why Calvin Coolidge, you sly fox.

5. In which she and The Child go to Hogwarts. In the greatest of all possible boondoggles, I managed to get a magazine assignment that sent The Child and me to write a mother-daughter piece on the new Wizarding World of Harry Potter attraction at Universal Orlando. Me: mother-daughter bonding time! getting The Child her first byline! The Child: butterbeer! Pygmy Puffs! possible Luna Lovegood sightings! It was a busy, humid, footsore few days (we threw in Disney World while we were at it), and I came as close as I ever want to to losing my lunch on a roller coaster during the "Forbidden Journey" ride through Hogwarts.
But I got my bonding wish as we drove around listening to The Child's playlist in our air conditioned Ford Focus; and she got to live her longtime fantasy of walking in Harry's footsteps—even if she was joined by ungodly numbers of fellow tourists, many of whom had waited up to six hours just to get into the park, followed by untold hours of waiting for rides, butterbeer, food, and the privilege of spending money in the Potteresque shops. The Child's advice: Go in a year. (Footnote for Potter fans: Sadly, the pygmy puffs were sold out, the Extendable Ears hadn't yet come in, and Luna Lovegood was nowhere to be seen. But the chocolate frogs, complete with holographic trading cards, were plentiful, and the girls of the Beauxbatons Academy of Magic and the boys of Durmstrang Institute made fetching appearances.)

6. In which she enjoys her honeymoon. Humidity, crowds, non-functioning subways, the Gay Pride Parade landing on our doorstep? Bring 'em on! I'm in my honeymoon phase—with my Beloved-Husband and with New York City. They both delight, inspire and intoxicate me. And I don't have to find parking! I'm a lucky girl. 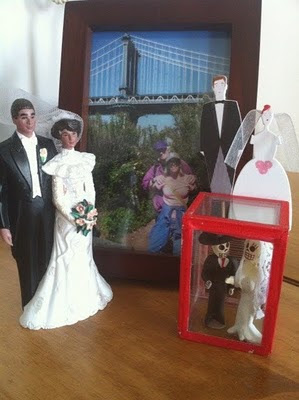