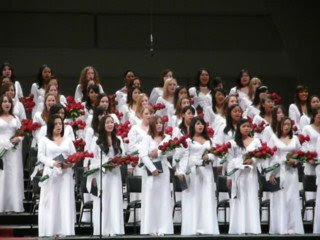 Sometimes I think I've had a little preview of my future. What's surprising to me—me, who has spent the last year trying to hold on to time like a kid trying to stop a wave from going back out to sea—is that these glimpses have been strangely reassuring.

In early June, my daughter graduated from high school. Her high school, which was also my high school, has a longstanding tradition of holding its graduation ceremonies at the Hollywood Bowl, the girls wearing white dresses and holding red roses. The class sang Regina Spektor's The Call: "I'll come back/When you call me/No need to say goodbye."

I expected to sob through most of the ceremony. But instead, the ritual of the event felt like a true expression of that dreaded word "closure." It was an elegant punctuation mark on her high school career...and her childhood.

Sandy Banks, a columnist for the L.A. Times, once wrote that the moment your child goes off to college feels like "a referendum on your parenting." You've had your shot at forming, shaping, teaching your child—now it's too late. The kid's out of your grasp.

At several points during my daughter's senior year, that knowledge gave me almost physical pain. I regretted my mistakes. I lamented that she'd spent most of her entire childhood shuttling between two houses. I felt there was so much I should have taught her; that I should have provided a more...I don't know, thorough upbringing.

But somehow, watching that graduation ceremony—and seeing her joy in it—gave me a sense of completion, not loss. And I felt like I was getting a peek at her college graduation, after what I hope will be a very...thorough four years.

Today, I drove down to my ex-husband's house to pick up my daughter for lunch. We went out to a restaurant, we talked, we went shopping at Target (I treated), we got an ice-blended coffee (she treated). We put our arms around each other's shoulders as we walked across the parking lot.

Maybe it's wishful thinking; maybe I'm tempting fate. But I want to think it was a little preview of a future in which my adult daughter and her (older) mom hang out, enjoying each other's company, teaching each other stuff. The referendum's in the pudding. Or something.

I know that I have no idea how things are going to go from here. I can't shape things any more now than I could 18 years ago. But really, it doesn't matter. Even if the future plays out completely differently, I had it today, and I'm grateful.
Posted by Susan Champlin at 10:01 PM

All best wishes for the future. However, I'm sure all will work out well since it sounds as if you've done an excellent job of parenting!
Congrats!

PS Came across yr comment on Charley Circus's great blog - I used to live in LA & have many happy memories of the Hollywood Bowl (less so of gridlock on the freeways!)