The Sea of Grass

There's a wonderful piece in the Travel section of Sunday's Los Angeles Times, written by the paper's former copy editor Karin Esterhammer. The piece, compiled from Esterhammer's e-mails to family and friends, describes her new life in Vietnam. A year ago, her husband was between jobs, the couple was looking for a new experience in a less-expensive city, and they'd enjoyed previous visits to the country, so the Esterhammers and their 8-year-old son packed up and moved to Ho Chi Minh City, the former Saigon.

Meals cost 85 cents there. Cable TV—"with all the fancy channels"—is $4 a month. Myriad children play up and down the narrow alley of their working-class neighborhood. The language is impossible, but nevertheless, Esterhammer writes, "It's just so, so, so incredible here. I love, love, love it."

I read this piece with fascination and admiration and envy. And a little embarrassment that I've been yammering on about my impending move from one expensive, English-speaking American city to another—when here was adventure on a whole different scale. But mostly I just thoroughly enjoyed Esterhammer's almost-palpable glee over their new life.

How many times have we all fantasized about our other lives in our other places where we practice our other livelihoods? That place where the realities of this world have no bearing.

For a long time my go-to fantasy involved a small town on the rocky coast of Maine where I ran a little bookshop. Or where I sat in my rustic kitchen at a butcher-block table looking out at the Atlantic and writing mystery novels. It was usually a bit foggy there, but that was okay, because I had oversized fishermen's sweaters and hot mugs of tea to wrap my hands around.

Recently the scene has shifted a little, but not too much: Now I'm in Provincetown, at the tip of Cape Cod, in the off-season when the oversized tourists have gone and the community is close-knit and mutually supportive. In this one, we live in a little cottage with sand on the front steps, and I ride my bike out to Herring Cove, or down to the coffee place on Commercial Street, or over to the P.O. to mail letters to my poor family members who are still stuck in L.A. traffic.

In the so-called real world, I'm still in L.A., gradually (too gradually) shedding my possessions and planning for our decampment to New York City. But work stress—and mortgage stress and dental stress and child-in-college stress—encroach on a daily basis, and sometimes I need a getaway quicker than I can get away.

Right now, I think I'm going to head to southern India, to the backwaters of Kerala, where we float languidly on a kettuvallam—a "tied boat" whose slats are lashed together with coir rope made from coconuts—through canals cut between coconut palms and banana trees and mangroves. It's sultry and lazy and the sky is ultra, ultra blue. And the nonexistent phone never rings. 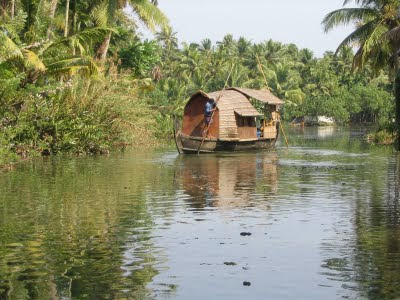 Ahhhhh to escape. You too are a gypsy like I am. Couldn't they just invent a real-life teleportation machine that could send you anywhere you wanted? I dream of having a night walk in London and leaving as soon as it starts to rain. I dream of going to the Maldives for months, growing brown by the white sand beaches and clear water. I wish I could spend a year in France totally immersed in their language learning to speak and living in a flat from the 1700's. Why can't we have it all? Live everywhere? That's what I admire so much about movie stars. They get paid to travel and see the world. I know they complain, but my god, what they've experienced. I wish life wasn't a reality sometimes. That I could be a rambler and walk through this planet and live wherever my heart told me at the time. I feel so bolted down. I too dream of that boat--being lulled to sleep by the water and the sky. One day, right? We MUST keep dreaming that it will happen one day. If not...then I shall crumble. Lovely piece. xoxoxo--One of 365