I've been trying for several days to write a piece about feeling discombobulated, but I haven't been able to get myself combobulated enough to write it.

I feel like a sparrow hopping between twigs, with no perch to land on.

Last Thursday, I drove from New York to The Child's college for Family & Friends weekend. It rained on me most of the way up—when it wasn't snowing. Little did the college know that I had almost no intention of attending the myriad events scheduled (the better to extract donations for a shrinking endowment, my dear), and that I was using the weekend as an excuse to soak up time with my daughter.

Because I waited too long to make reservations, the only hotel room I could get was a half-hour drive from the school. Then I found out about a wonderful program called "Beds for Books," in which local residents rent out rooms in their homes during special college weekends and donate all the money to the local library. I signed up, and was matched with a couple who lived across the street from the college. Genius! And in a wild stroke of coincidence, the husband turned out to be one of The Child's professors. Awkward!

Actually they were lovely, although for obvious reasons, neither I nor The Child was comfortable with the idea of lolling about their house for relaxed visits. And because she refused to let me see the inside of her dorm cell, that meant we spent three days looking for things to do in 35-degree weather, rather than just hanging out and being. We did a lot of driving and meal-eating. In an odd way, being together like this made me miss her more.

Of course, it was still October in New England, and I went snap-happy as I...

...drove onto the campus: 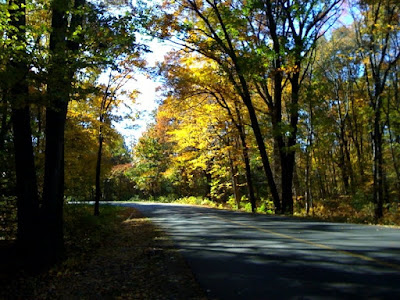 ...crunched through the woods: 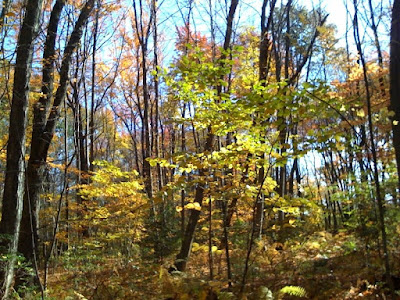 ...admired the leaves in a tiny creek: 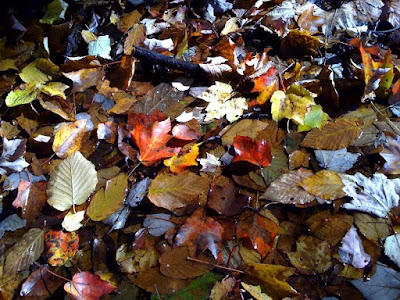 ...scoured the empty shelves at the local market for their insanely popular cider doughnuts, only to be offered one that had just come out of the oven: 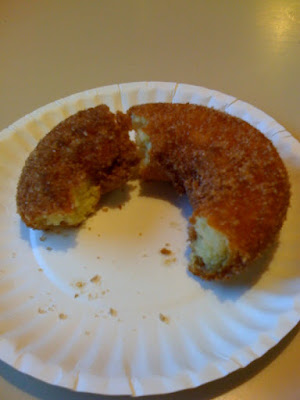 ...waited in the car in the rain for my oversleeping child to join me for our final brunch: 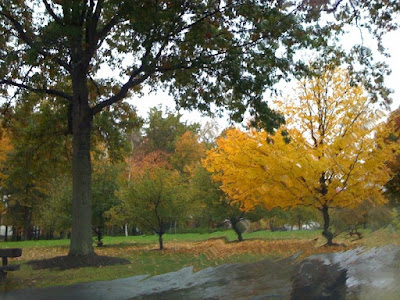 ...handed her the camera as we drove past the house selling pumpkins from their front yard: 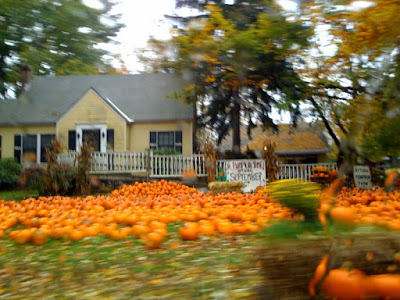 ...and watched her return to her dorm before I turned the car around and headed back to New York: 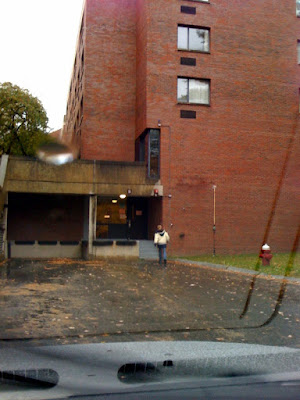 It felt like a long drive back—though a quick visit to my favorite McDonald's ladies' room in Southington, Connecticut, with its inexplicable choices in wall art, cheered me up for a minute: 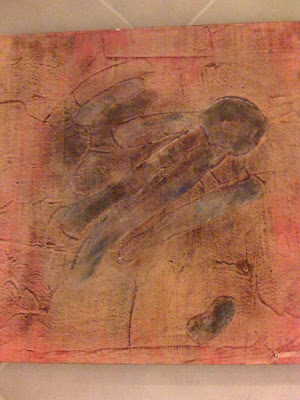 As soon as I got back to New York, it was time to move out of the loft: The guys were coming first thing Monday morning to refinish the floors. We spent Monday trooping through the streets of the Village, catching a movie, and then spending a restless night in a friend's apartment, where the radiator clanged so loudly I'd swear someone was hitting it with a baseball bat.

Tuesday I flew home. Where is that, exactly? Oh right, Los Angeles. The condo where we've just begun the process of getting rid of everything we've stored up for 10 years. Where my daughter's room is stripped bare. Where the carpet is...beyond description. The place where I now feel more like a visitor than I do in New York.

Today I met with the realtors who will help me sell the condo. I'll get it painted, get new kitchen flooring, replace the carpet. Get rid of my lousy furniture and rent a decent-looking dining room table and chairs. And we'll live in a pretend house for a while until we finally pack up our jammies and my favorite stemless wineglasses and The Child's funky antique dresser and head east.

Title courtesy Rosalind in William Shakespeare's As You Like It, in which Miss Hepburn starred in 1950.
Posted by Susan Champlin at 1:46 AM

Somehow, one never tires of fall on the east coast. I loved your crunchy leaves, the rows of pumpkins, even the half-eaten donut. LA must seem like such a let-down after all of that.

I'm glad your daughter is settling in & that we'll have you back here at least for a few more weeks.

Those pictures are my fantasy of what an east coast college experience should be. It makes me feel like sweaters and soup and fuzzy socks. Ah well... Welcome back to 80 degrees in October... xo Mrs L.

Thank you, Miss Whistle and Mrs. L. Yes, when I get my second go-round, I'm attending a small liberal-arts college on the East Coast...and gaining my Freshman 15 from an excess of cider doughnuts. It will be so worth it.

Maybe it will help to know that the weather here is totally unpredictable -- wintry one day, 80 degrees the next.

As for your upcoming move -- should anything go awry in the kitchenware/tableware/ glassware/flatware department I have two words for you: Fishs Eddy. http://www.fishseddy.com/

mother-daughter time is the best. yes, i love my father, but there is just smthg special about being with your mum. as i have grown older, i feel i need her more. hope the weekend was lovely. x

Your blog is outstanding! Here is a post about Katharine Hepburn visiting Sandusky in 1940:

CampusLady and Shayma: Thank you for your lovely comments—and I do feel that mother-daughter time is irreplaceable. In fact, I'm missing it right this minute.

Anonymous: Thank you for the link to that fantastic story. I love picturing KH swanning about Sandusky in 1940. Charming.