One of the great surprises of starting this blog was discovering the world of support and fellowship that existed "out there"—though fellowship is an unfortunate word, since my blog world is primarily populated by women. Articulate, funny, self-deprecating, generous, open-hearted women. From the charming and poetic Miss Whistle, who inspired me to start this blog, to the witty and fashion-savvy (not fashion-slavish) That's Not My Age, whose acquaintance I made just yesterday, these women have included me in a community that expands infinitely outward yet remains as warm as a campfire circle. (I'd also like to thank my muse, Katharine Hepburn, whose name always manages to catch people's eye.)

Yesterday, the Finnish goddess Helena Halme, who tells the romantic story of how she came to marry her Englishman and live in that country for now more than 20 years, "tagged" me in a sort of blog round-robin. When tagged, you're supposed to reveal 10 things about yourself then pass the baton to seven others whose blogs you admire. As Helena suggests, this is a good news/bad news thing: an honor to be listed, a challenge to reveal. Then I decided this blog is nothing if not a great wallowing in self-revelation, so what the hell? Fortunately, Helena and others before her have already played fast and loose with the "10" part of the deal, so I won't be struck dead if I come up short. Here goes.

1. My original life's dream was to be an actress. It was a high school dream, I admit, but passionate and real—until my un-Hepburn insecurities took over and I switched to my default setting: a college English major and a career spent behind a typewriter and a computer screen. Not that there's anything wrong with that! Unless you're doing it out of fear and retreat, rather than by choice. So my midlife efforts at Hepburnization are, in part, an attempt to reconnect with the teenager who never felt happier or bolder than when on stage playing Helen Keller in The Miracle Worker or Hermia in A Midsummer Night's Dream or Adriana in A Comedy of Errors.

2. I'm only now beginning to overcome Imposter Syndrome when walking the streets of New York. For the first nine years I visited New York, I was convinced that every person I passed on the sidewalk was looking at me and saying, "She's obviously not from here." Or worse: "She's obviously from California." I dodged and wove in the face of crowds. I was way too polite. I gave everyone else the right of way. And my clothes! Every season there seemed to be some mutually agreed-upon uniform—ballet flats or tight jeans tucked into boots or mini skirts with black tights—and I was never wearing it. Now for the first time I've either gotten with the program (thank you, Michele Hush, for the advice on buying a down coat), or I've decided I don't give a flying...whatever. Which would make me a true New Yorker.

3. I love water towers on the tops of buildings, trash cans on every corner, and ancient diners with $1 cups of coffee. I must look like a lunatic these days, because I'm smiling all the time as I tread the dirty, dog-poop-smeared, ice-encrusted streets of this city. I'm in my honeymoon phase, where I love everything about it. Subfreezing temperatures? Invigorating! Taxis honking? Musical! That razor-sharp wind off the Hudson? Um, that sucks.

4. I can be a spoiled princess baby. After I made my 47th elevator trip from the sixth floor to the basement while trying to do two loads of laundry with competition from five floors' worth of dirty underwear and dryers that left everything delightfully moist after an hour's worth of creaking and tumbling, I sniped to Stan, "We really have to install a washer-dryer in this apartment." He blinked at me. "I've never had a problem with it," he said. Then he added the magic words, "So I'll do all the laundry."

5. I'm more attached to my car than I admit out loud. My car's name is Dusty. For obvious reasons. She's a blue, only slighted dented 1999 Honda Civic. I resented her just the tiniest bit when I got her, because she has an automatic transmission and I really prefer a stick. But she carried us across the entire country without incident, then took me and The Child safely through a winter weather advisory, including icy interstates and swirling snow flurries, as I drove The Child to her New England college last weekend. 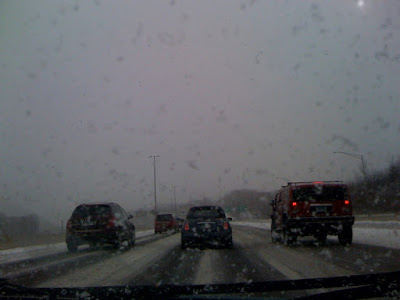 I'm selling my trusty steed on Saturday. And while I'll be happy to be liberated from insurance payments and gas expenses and repair costs, I'll be a little sad, too. Goodbye, Dusty. 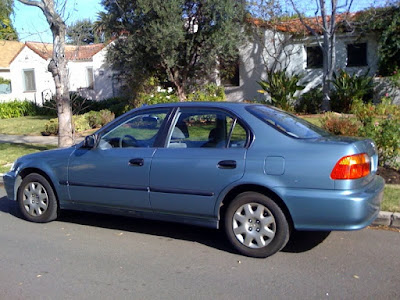 6. I get testy with New Yorkers who engage in clichés about Los Angeles. We once had dinner with good friends of my Beloved, on whom I was really hoping to make a good first impression. The wife was chic and elegant. "Do you like living in Los Angeles?" she asked with velvety incredulity. I nearly bit my tongue off. "It's my home," I ended up saying. Lame. Say what you will about L.A.—traffic yes; plastic surgery, yes; sprawl, yes; 'Have a good one,' yes; the weather, yes—it's as rich and astonishing, as spectacular and as vile as anywhere on earth. I like that about a city.

7. I'm still making it up as I go along. Whether it's parenting or relationships or my so-called career, I basically have no idea what the heck I'm doing. I'm hoping that good intentions and sincerity make up the difference.

Okay, kids, that's all I got. At least there's a certain symmetry: 7 revelations, 7 blog recommendations. (Limiting the following list to 7 is much harder than coming up with 7 revelations; I've included blogs that I believe have not already been tagged elsewhere.) And I'd like to state for the record that, according to my made-up rules of the game, you 7 have no obligation whatsoever to play along. I just love what you're doing and wanted to say so in public. Herewith, in alphabetical order:

A Bag of Chips: Yes, she's my niece and no, I don't consider that cheating. She's creative, thoughtful and funny as hell. She's a photographer, scrapbooker, baker, and mom to three gorgeous live-wire children. And she made me a spectacular quilt for Christmas (thank you, Tina!), which you can see when you check out her blog. I especially recommend "Tina and the Terrible, Horrible, No Good, Very Bad Day."

Divinipotent Daily: So smart. So well-spoken. So literate. Every post broadens my intellectual horizons—in a readable, down-to-earth way. Side benefits: good quotes you've never heard before and great poetry. I especially recommend "Goodbye and Good Riddance, 2009."

Miss Whistle: She radiates positive energy, writes with heart and brains, and may be the most naturally generous person I've ever met. She recently lost her beloved father-in-law, and wrote exquisite pieces throughout the experience that conveyed simultaneously the incomparable loss and the enormous pleasure of his well-lived life. I especially recommend "Epiphany."

My Red Boa: I hope that I won't mortify my dear friend Marsha by mentioning her blog, which features beautifully rendered pieces about her childhood and young adulthood—nostalgic with a sly wit. I hope that she has recovered enough from her recent spill to think about sharing more of her stories. I especially recommend "Esmeralda and Me and the DMV."

Simmer Till Done: Luscious food, lustworthy photography, and best of all, writing that combines phenomenal intelligence with sharply honed humor—I ask you: What's not to love? Every post makes me want to cook, and as Jack Nicholson said in As Good As It Gets, "to be a better [hu]man." I especially recommend "You Scrape the Bowl Like a Housewife."

So Lovely: Heartfelt, unpretentious, and truly democratic in her interests, the pseudonymous Charlie Circus offers a cornucopia of topics and musings on her eclectic blog. She gave me a post's worth of Stuff to Think About in the piece I especially recommend, "A Longish One But Bear With Me..."

I Must See the Dhobey: Here's a blogger who almost certainly will not participate in this little tagging game: She's busy blogging from Burma in 1907. In fact, the fascinating posts are actually excerpts from letters written by the blogger's grandmother, whose surgeon husband was superintendent of the jail in Rangoon, Burma.
Posted by Susan Champlin at 2:44 PM

Thank you so much for mentioning my blog. You've now been elevated to new best friend status! And, I am obsessed with the water towers in NYC, every time I visit I take photos, I've even had a couple framed and put them on the wall.

PS I think that 'A bag of chips' could be the best blog name ever - I'll check out your recommendations. Thanks

You're on! Thanks for throwing down the gauntlet. I will post my 7 whatevers next week. As for water towers, I've always loved, them, too -- in fact, when I was a teenager I was determined to live in one. It was going to have a spiral staircase leading to two or three upper levels and all of the furniture was going to be suspended like a porch swing. Come to think of it, I'd still like to live in one, but I'd add some insulation.

Susan, I love your random things! And I'm honored by your lovely, too-kind words. I'll get some random bits of my own up at Simmer. In the meantime - say farewell to Dusty for me.

Well, I almost wish I that too had a blog.
So glad I can always count on smiling to myself as I read your posts. Thank you.

That's Not My Age: I'm delighted to have and be a new BFF! And I think I may have to amend the post to add a water tower photo. What is it about them?

Michele: Speaking of water towers, I love your interior design idea. Suspended furniture—just pop a little Dramamine and it sounds heavenly. Looking forward to your 7 whatevers.

Marilyn: We watched Dusty drive off last night (sniff!), but she's now owned by the daughter of a good friend, so she's staying in the family. Looking forward to your random revelations, too.

Irene: I will be your first and most avid reader when/if you start a blog!

wishing you a very happy new year, susan, may $1cup of coffees, that little diner on the corner, ice-encrusted streets and the other "annoying" things about your new home always make you smile. best wishes for the new decade, shayma