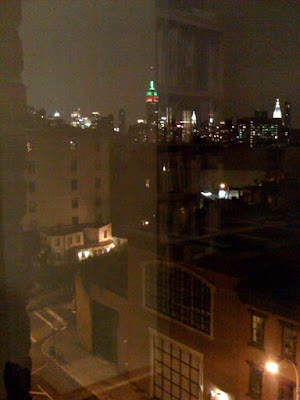 We're here. Safe in the New York loft looking at the view through the window while the New Year's Day Twilight Zone marathon plays on TV. All of the boxes and backpacks and bags of snacks have been unloaded from the car, which is parked two blocks away (a Manhattan success story).

We keep saying, "We're home!" and "We're back!" and "We did it!" and "My back hurts!" Yet it's strange, too, to realize that we're finished traveling.

We went from west to east in 7 days, and I feel like I gathered up the entire countryside as we went along and brought it with me, like rolling up a ball of yarn. I have this silent slideshow playing in my head all the time: red New Mexico plateaus, rolling Texas plains, bare-branched Tennessee woods, split-rail fences undulating over snowy Virginia pastures. We may be in the middle of New York now, but I'm still seeing Arkansas farmland and some jet-black grazing cows out of the corner of my eye.

We left Knoxville, Tennessee yesterday morning in a foggy rain—amazingly, the first "weather" we had to deal with on the entire trip. 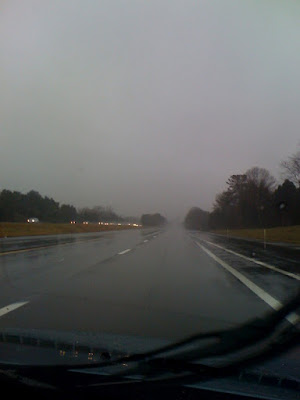 Somehow, even though we were making this trip in the middle of winter, and despite Midwest and East Coast blizzards in the days before we left Los Angeles (which caused no small amount of fretting on my mother's part), we managed to stay ahead of or behind the snow all the way across the country. Each day as we left our motel, I'd check the weather app on my iPhone, and see that the city we were leaving was due for snow...tomorrow. And we'd scoot out of town in the sunshine.

It rained all the way up and out of Tennessee and into Virginia, which still wore the hand-me-downs of the giant snowstorm that hit just before Christmas. 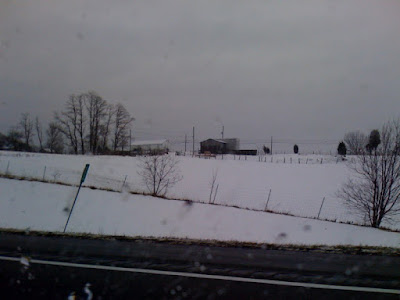 Yet the highway was perfectly clear.

We drove all day and, as we did every day of the trip, arrived at our destination after dark. Before we left L.A., I'd had idealistic visions of hitting the road every day by 8 a.m., getting in our 7 hours of driving and arriving by mid-afternoon with plenty of daylight left. Ixnay on all counts.

We routinely drove out of the motel parking lot between 9 and 10 in the morning. Those 7 hours of driving turned into 9 when you included stops for gas and food and bathroom breaks and just plain sanity. And we never landed anywhere with even a sliver of sunshine remaining. Fortunately, we had the sense to always book a hotel room the night before, so we were never stumbling around looking for lodgings in the dark (a potential divorce issue even when you're not married).

But yesterday was even better, since we were staying with my cousin and her family in Springfield, Virginia, and we arrived to a warmly lighted house and a kitchen filled with the aromas of my cousin's scallop bisque, fresh bread and coffee cake that had just come out of the oven. I announced that we were moving in permanently. She took it well.

New Year's Eve notwithstanding, we were asleep by 11 p.m.—with a brief wake-up call at midnight when the neighbors set off fireworks.

And at 1:00 this afternoon we were back in the car for the last leg of the journey, carrying fresh supplies: half a homemade vegetable lasagna, peppermint brownies (with two layers of frosting) and chocolate-oatmeal-peanut butter cookies. No, she's MY cousin, and you can't have her.

On this day, finally, we knew we were in the east. For one thing, after six days of spending eight hours driving across a single state, today we were in five states in four hours: Virginia-Maryland-Delaware-New Jersey-New York. For another, after six days of driving for free across more than 2,000 miles, today we got gouged by tolls every 27 minutes. $2, $5, $4, $5, $8.70 and $8. Extortion! Graft! Waste, fraud and abuse! Welcome to New Jersey! 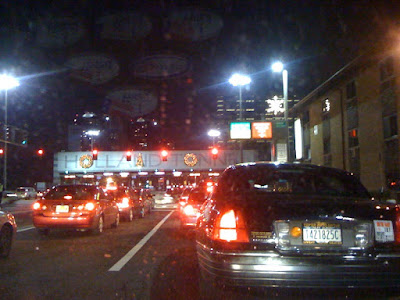 But then the magic happened. We went to light speed as we entered the Holland Tunnel... 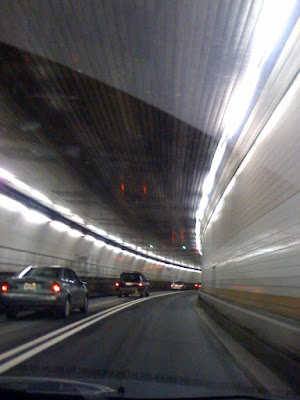 ...and when we came out the other side, I was reliving the moment nine years ago when I first popped out of that tunnel, riding in the back seat of a taxi after a red-eye flight from L.A. to visit my new beau, who met me in the lobby of his Greenwich Village apartment building looking sleepy and rumpled.

Now here we were, my beau and I, in my little car with California license plates, making our way up that same Hudson Street to that same former factory building in Greenwich Village we'll call home together.

For some reason, I had a hard time thinking of songs about Knoxville, Bristol, Staunton, Front Royal, Silver Spring, Wilmington, Trenton or Metuchen, but my favorite New York bard, Paul Simon, wrote the song that brought us home today:

America (Simon and Garfunkel)
"Counting the cars on the New Jersey Turnpike/They've all come to look for America."
Posted by Susan Champlin at 8:33 PM

I love your posts, your writing is so well thought out and vivid. More please!

I know that feeling when the taxi emerges from the Holland Tunnel, when tired from a flight but so exited at being in NYC.

So enjoyable reading your words, Susan. I got the chills at the end at the mention of Paul Simon's "America." Wishing you the very best in your new home in the new year.

I love that ball of yarn metaphor; it is perfect and completely new. And we'd all like to ask you if we can rent your cousin for special occasions.

Now - welcome to New York! I have two words for you: down coat. I lived in NY in a near-cryogenic state in January and February for most of my life. About ten years ago I finally wised up and bought an ugly but fabulously warm down coat (imagine a waterproof, mid-calf-length bathrobe) and now I want to shoot myself for all those wasted years. Get one!

Just caught up on your road trip and I must say that it was one delightfully deep-fried, pit-barbecued, home-baked meal. Greg and I love a good road trip, and yours was quite the excellent adventure - great food, great states and your ever-keen eye (and ears). "It took me four days, to hitchhike from Saginaw..."

Hi there and Happy New Year to you. I've tagged you in a Meme over on my blog.

PS. Thank you for your mail - I am terribly tardy when it comes to replying but it was nice to hear from you. xx

Hi, I've just found your blog and am following you now! Love it. I live in London but my brother lives in NYC - so travelling from New Jersey, through the Holland Tunnel to Manhattan always feels a bit like coming home to me.

Helena: Thank you so much for your lovely words, and for the great honor of mentioning my in your blog. I'll try to live up to it!

Irene and Marilyn: I'm not surprised that two such perspicacious women would have the same affinity for "America" as I do :) And THANK YOU for the home-warming welcomes.

Michele: As you know, I've already taken your brilliant advice about the down coat, and as the aptly named Robert Frost said, that has made all the difference. (Though he'd probably be peeved to have his phrase co-opted for a down coat.)

That's Not My Name: So delighted to "meet" you and to discover your lovely blog. Perhaps we'll meet in New York sometime!