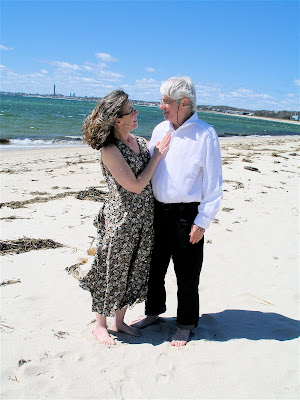 Congratulations! Aah, so romantic, I almost wish I wasn't already married and could do it all over again on a beach. Lots of good wishes & much happiness in the future.

This really is romantic. Amazingly so. May you have a phenomenal and joyful life together.

Wishing you every happiness and loads of love. xx

So happy for this wonderful, sand-in-your-shoes story and its very happy ending. Congratulations to you both! xo

Congrats. So nice, and enhanced by the lovely quotes.

What a beautiful wedding...and such a good writer to tell the story. May your years together married be as wonderful as your years before marriage....Love, John and Betty

What a wonderful story - the quotes brought tears to my eyes. Congratulations!

Thank you so much, Helena, Michele, So Lovely, Wzzy, Marilyn, Andrew, Betty and That's Not My Age! I so appreciate your support—I think that'll set us off on 20 good years at least! xo