When I realized that our route across the country was going to take us straight through Winslow, Arizona, I immediately made plans to have my picture taken standing on a corner. Yes, I am just that cheesy.

For anyone who isn't familiar with the phrase "standin' on a corner in Winslow, Arizona," I'll explain that The Eagles' song "Take It Easy" played approximately every five minutes on the radio during my high school years, and every 15 minutes in the 20 years after that. Its opening lines —"Well I was standin' on a corner in Winslow, Arizona/Such a fine sight to see/It's a girl, my lord, in a flatbed Ford/Slowin' down to take a look at me"—spring as easily to my mind as the national anthem. Er, more easily.

So after waking up in Flagstaff, Arizona to brilliantly sunny skies and tiny ice crystals covering the roof and trunk of my car.... 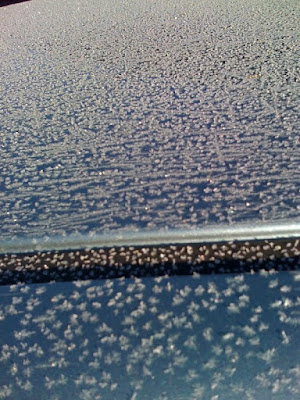 ...and after a mobile breakfast of Grape-Nuts poured into yogurt containers, and after listening to radio advertisements for the Meteor Crater ("Feel the impact!"), we arrived in Winslow, where I discovered I was not the first person to think of having my picture taken standin' on a corner. In fact, standin' on a corner in Winslow, Arizona is practically the town's biggest industry.

We stood on the northwest corner in Standin' on the Corner Park, next to a mural of a girl in a flatbed Ford and a bronze statue of...Glenn Frey? 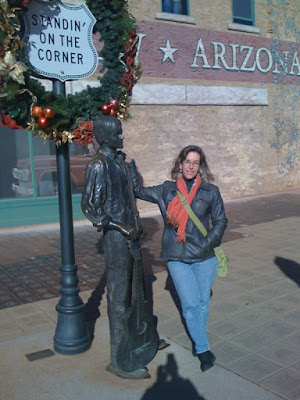 We stood on the southwest corner, outside a gift shop that played The Eagles in constant rotation on outdoor speakers. 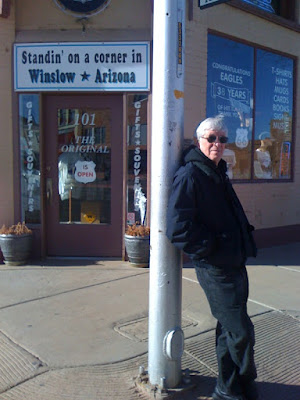 We watched a Japanese couple stand on the southeast corner taking pictures of the southwest corner. And we stood on the northeast corner, outside another gift shop where the owner cheerily told us to "Take it easy" as we left with "Standin' on the corner" refrigerator magnet in hand. As we headed back onto the road, a couple from Iowa arrived in a white SUV with "Take It Easy" blaring out of their car windows.

The next several hours were a spectacular tour through the Southwest and Tony Hillerman country—red plateau cliffs glowing under blue skies. I kept trying to capture the landscape, but the drama refused to be corralled into an iPhone lens. This was about the best I could do: 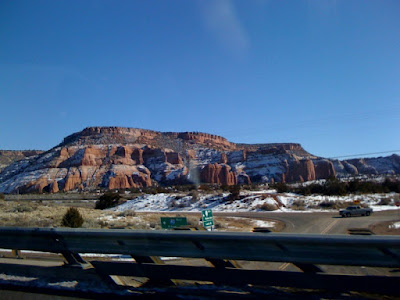 We had lunch at the counter at Earl's Restaurant in Gallup, New Mexico, where the deliciously spicy posole brought a fine sweat to my forehead and I dipped Navajo fry bread in honey.

We passed through Albuquerque without stopping, but of course were lured into the "world-famous" Travel Center at Cline's Corners, picking up prickly pear marmalade and red chili-shaped salt and pepper shakers. (Come on, could you resist?) The sky was dark when we came out, and we spent the next hour and a half driving through the pitch black, while I exchanged text messages with The Child, who was on her own California road trip with her dad.

Me: BTW, favorite highway signage of the day: "Gusty winds may exist."

She: Truly an extraordinary revelation, and one that definitely required signage.

At 7 p.m., we turned off the highway in Tucumcari, New Mexico, and onto historic Route 66, where Elvis welcome us to the Motel Safari. 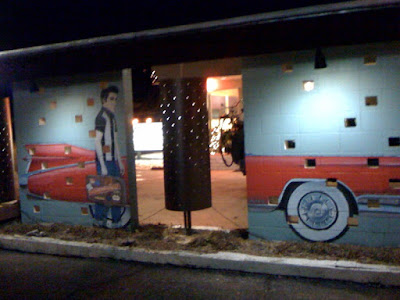 With a good mattress on our king-size bed and excellent reception on the flat-screen TV (this is the Route 66 of 2009, after all), we could finally, really take it easy.

Posted by Susan Champlin at 9:49 AM

And I've had "Willin'" stuck in my head since reading your post yesterday: "I been from Tucson to Tucumcari...." (beloved Little Feat song, also covered by Linda Ronstadt)

You are doing something I have always wanted to do. My sister drove across country a couple of times in a pink Cadillac convertible with a dog and some French lop-eared rabbits in the back, though. She also started from LA. Maybe it's easier to go east.

Anyway, can't wait for the next installment.

Karen, how right you are! I even said to Stan before the trip that I had to go through Tucumcari because of that song (and if I could hit Tehachapi and Tonopah, too, I'd be even happier). Can't believe I forgot to mention it. Thank you for the reminder.

Michele: A pink Cadillac convertible and French lop-eared rabbits? Your sister has me way beat. But even in a sad little Civic, it's a dream trip. Definitely do it; you'll love it.

Irene: I know, I now have at least 3 songs stuck in my head now! And it's worse when you don't know all the words. "Something something Winona...something...get your kicks on Route 66."