We woke up this morning in Memphis, had lunch in Nashville, and tonight are sleeping in Knoxville. I love saying that.

I've never been to the south before, so there was a little thrill in crossing the state line from Oklahoma into Arkansas yesterday—even if we drove straight across with almost no stops and without even taking a picture.

My I-love-the-world glow faded some in the cold icy light of an Oklahoma City morning, as we slid out of the motel parking lot after not enough sleep and a heater that noisily pumped hot air into the room all night long. Yesterday's travel became a Point A to Point B mission—Oklahoma City to Memphis—and we accomplished it without a lot of touristic fanfare.

But our spirits lifted as we crossed the Mississippi River toward the lights of Memphis. I'd booked us into a Holiday Inn smack downtown, two blocks from Beale Street, and even though we were too tired and it was too cold to do much adventuring, we were both happy to be there. And when we walked out the front door and I saw this... 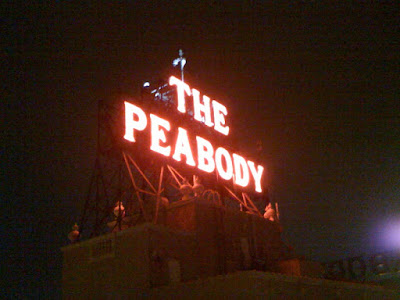 ...I couldn't help myself. I squealed.

"Isn't this the place with the ducks?"

"What are you talking about?"

I started to doubt myself. And then I saw the bronze duck webprints in the sidewalk outside the Peabody hotel.

Indeed, it was the home of the famous Peabody ducks, which have swum in the hotel fountain since the 1930s (not the same ducks), and which are marched with red-carpet formality and John Philip Sousa accompaniment from their rooftop home into the elevator and down to the lobby fountain at 11 each morning. At 5 each evening, the ritual repeats in reverse. We'd missed the march, but paid a visit to them on the roof. 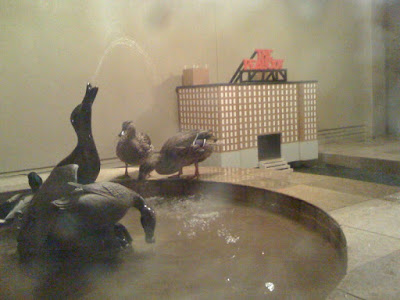 Afterwards we walked down to Beale Street, and were sad to discover that the birthplace of the blues is now a Disneyfied theme park—a deserted one in the dead of winter. Horse-drawn Cinderella-style carriages decorated with Christmas lights trolled the streets offering rides. Barkers tried to lure the few shivering tourists into their clubs and restaurants, where bad blues covers blared through the windows. We passed.
Today we drove from western Tennessee to eastern Tennessee, with a midmorning stop at Loretta Lynn's Kitchen in Hurricane Mills. I bought Loretta's blackberry preserves, strawberry jam and moonshine jelly, and trotted out for Stan my favorite Loretta Lynn Fun Fact: She became a grandmother at the age of 29.

At lunchtime, we made our way through downtown Nashville to Hog Heaven, a barbecue place we'd read about in the tour book, which turned out to be a tiny shack with one outdoor counter and no indoor seating. Undeterred, we bought our food (pulled pork for me, with turnip greens and blackeyed peas; greens, peas and barbecued beans for my Beloved) and sat in the car next to a McDonald's to eat it. Will the glamour never end?

"California!" said Drew, the young musician working the counter at Hog Heaven. "What the hey-hey are you doing all the way down here?"

It's a question we've heard in various forms along the way, and I get a charge out of saying, "We're moving from L.A. to New York," which always gets a cluck of admiration.

Of course there are downsides to traveling cross-country on a deadline, and today demonstrated the great big one: We saw nothing of Nashville, one of the great American cities. Not that I regret for a minute doing this drive rather than taking yet another plane trip, but it becomes obvious that this is a note-taking trip, not a sight-seeing one. And that we have to return.

That's okay with me.

Before I was so rudely interrupted by a non-working Internet connection at the Holiday Inn in Memphis (otherwise a great old hotel—and an excellent mattress), I put together a playlist of songs to commemorate our trip through Day 4, which ended in downtown Memphis.

Los Angeles, I'm Yours (The Decemberists)

Route 66 (Bobby Troup)
For obvious reasons. I adored the Depeche Mode version in the 1980s, but it's been replaced by a pesky remix with a too-insistent guitar line, so I'm also providing a link to the Rolling Stones version of the 1960s. And may I just add a personal tribute to Bobby Troup, whom I, as a kid, knew only from the 1970s TV show "Emergency!", in which he starred as an ER doctor and his wife Julie London co-starred as a nurse. And Randolph Mantooth starred as a paramedic. Why do I remember this?

Winslow, Arizona
Take It Easy (The Eagles)
POSTSCRIPT: After all these years, I just learned from my friend Carolyn that Take It Easy was co-written by Jackson Browne, and I would herewith like to give him the appropriate credit. (And credit to Carolyn, as well.) Thank you both!

Albuquerque, New Mexico
Point Me in the Direction of Albuquerque (The Partridge Family)
Hey, I didn't say I was creating a list of brilliant music by genius songwriters. I watched "The Partridge Family" faithfully when I was between the ages of 9 and 14, so this is like a free-association exercise for me. You say "Albuquerque," I say, "Point me in the direction of."

Muskogee, Oklahoma
Okie from Muskogee (Merle Haggard)
As sung by Haggard and Willie Nelson. I have to admit I didn't know anything about this time-warp song except the title, and was kind of dazzled to watch an old 1968 video of Haggard singing "We don't smoke marijuana in Muskogee/We don't take our trips on LSD/We don't burn our draft cards down on Main Street...". Wow. But I did enjoy the irony of watching Willie Nelson join Haggard for a duet on this ode to all-American purity. Note that Nelson joins in after the marijuana line...

Places like Memphis and Knoxville sound so exotic, as if in a dream. I've never visited the south, either, but you and your playlist have inspired me to do so. I wish blogger could make one of those little cartoon maps where you see the progress of a little car stuffed with suitcases make its progress in dashed lines across the country. I could have sworn that Oklahome City was east of Memphis, not west...

I'm glad you're safe and sound in NYC. LA misses you.

oops, middle of the night and didn't edit my comment. Should've said:

I wish blogger could make one of those little cartoon maps where you see the progress of a little car stuffed with suitcases making its way in dashed lines across the country.

Miss W: I think your comment was perfectly clear both ways—and I love that idea. Wish I'd had an old-fashioned "Casablanca"-type map app that would have let me track our progress (and if I were more technologically adept, I'd probably have discovered there IS such a thing). Thank you for traveling with us. I miss you, too!