I've been a little blueish, perched here in my fake museum house with its odorific new carpet, stark walls and echoing rooms devoid of furniture.

My Beloved is still in New York, The Child still at school, so I'm bumping around here by myself for the time being. Just me and the carpet guy, back by popular demand; Sam the handyman; and the Russian dryer-repair man. (He: "Det vill be two hondred seexty seffen dohllars." Me: "No senk you, I coot be buying nyew one for det much.")

We were in New York for Thanksgiving, the first time since my junior year abroad that I wasn't at my parents' house surrounded by the clamorous Champlin clan. We're usually 30ish at dinner, scattered among several tables, every chair in the house and the piano bench pressed into service, sisters manning the mashed potatoes and the salad and the gluten-free pumpkin pie, brother wielding the ancient carving knife and fork, the under-12 set in the back bedroom draped over the king-size bed watching Nickelodeon before dinner.

In New York we were three in the apartment, once The Child and I found each other through the throng of the Port Authority bus terminal after her six-hour ride down from college. She and I spent Wednesday afternoon in the kitchen, listening to her "Music to Bake By" mix as we made two pies, pumpkin and lemon meringue... 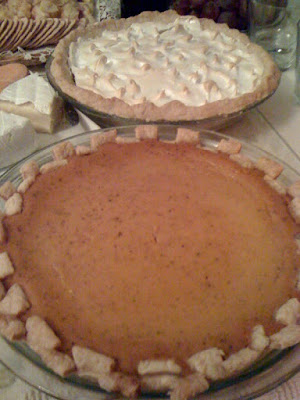 ...and a batch of cookies that emerged from a deliciously disastrous pie crust dough. I called them Mortification Cookies.

At dinner on Thanksgiving we were eight around the table in my Beloved's younger son's apartment, where Peter and his beautiful Portuguese bride, Mariana, cooked the first turkey of their lives—perfectly. Every one of the six chairs in their jewel box of an East Village apartment was pressed into service, along with a trunk topped with cushions. 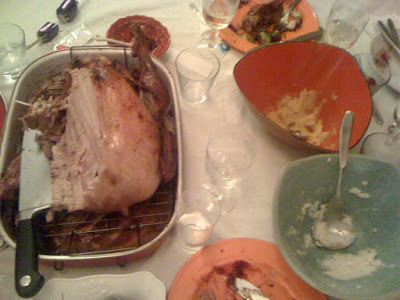 ...except half the turkey.

Then we sat with tiny cups of perfect espresso and talked for a few more hours. 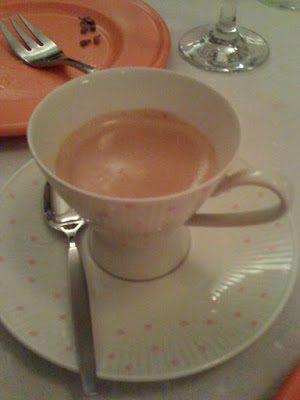 Late that evening, I called home to L.A., where I got passed around the living room inside the telephone receiver—"Have you talked to Susan yet? Here, talk to Susan." I missed them, and they missed us, but it was okay, too. My family is like a down comforter, and I felt the poofy warmth even across the country. Plus now I have family in New York, too.

The next day, the three of us took the subway to Times Square for a matinee of Finian's Rainbow—my Beloved's favorite musical—on Broadway. I spent the whole first hour and a half waiting for my favorite lyric: "For Sharon I'm carin'/But Susan I'm choosin'."

Afterwards, we walked through the holiday gift booths in Bryant Park and watched the skaters as the lights in the Empire State Building came on. 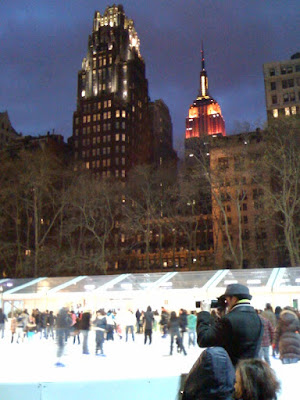 It was a very New York holiday, festive and busy. So the re-entry to L.A. was a little rough.

My voice—when I had occasion to use it—seemed literally to echo off the blank walls of the apartment. The blank kitchen window, missing the grotty mini-blinds that we'd thrown away without yet replacing, stared balefully at me in the evenings. I'd reach for the television remote to have a little friendly noise, only to remember we'd already gotten rid of the TV in the living room.

But this is temporary. I've met with the realtors, I've ordered the rental furniture, I'm tidying things up. The place will be on the market probably by the end of next week. Then we'll ring down the curtain on Act I.

Try filling that empty joint up with music. I've always found it a wonderful companion.

How did I miss this? I love everything about it, from Finian's Rainbow to poofy warmth. I'm such a Kate fan, and must admit to anticipating what your next post title will be. Summertime? Stage Door?

Christopher Columbus! I do enjoy your blog.

I could read an entire page of dialog between you and your Russian repair man. Oh pleeeeease post more about him!

I am also a huge fan of Finian's Rainbow.

oh susan, you say youre blue at the beginning of your post but then it all seems to be so lovely- baking with your daughter- spending time w your husband's son and his wife, the trip to Times Square...i have always celebrated Thanksgiving w my fam in DC- i used to fly from wherever i was to celebrate with them- but this time they were all in Pakistan...but my husband's baby sis came from college (your daughter's college,too!) and we had our own little party. i know how you feel, as i go through it, too. sending hugs, shayma

Michele: What a wonderful suggestion—you're so right about music. Of course our cheap stereo is gone (!), but perhaps the iPod is just the ticket.

Marilyn: You're the greatest—thanks so much for your kind words. And I love that you're anticipating my next title. I appropriated Stage Door already, but Summertime will definitely be making an appearance.

Miss Whistle: I hef to say det I yem quite glad nutt to be seeink det Russian repair men ever again! But senk you wery much :)

Shayma: Thank you for the hugs, and it's so nice to know you were enjoying the same kind of Thanksgiving celebration with your own college student—that's lovely.